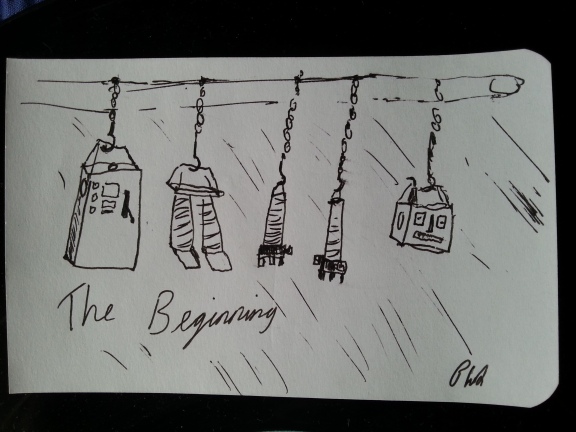 It all began in the fiery pits of Mount Dent-all Disease back in 1977. Through wicked acts of black magic, evil beats and dark matter the first Plaquerobot was designing to reign chaos and spread gum disease all over the world. Equipped with a strong urge to get rid of all those fake smiles of world, the Plaquerobot was assembled to become the model we today know as the Plaquerobot 1000. In daily terms the P-1000. The original name has been lost in the gruesome wars of the 70´ties, where Zendium so cowardly began collaborating with the newly developed mass exterminating electronic toothbrushes. and began a reign of extreme power abuse. Build into the Plaquerobot was a clever radar device, designed to locate two special agents who could turn the tide of the war…. Karius & Baktus. Last known location for the two senior Plaquistadores was according to the lost vinyl of Karius and Baktus, the atlantic sea. A massive test for the P-1000!

However through countless hours of search, The P-1000 managed to track down and locate the two Senior Plaquistadores on a small life raft assembled from Jens´ used toothpicks. Damn you Jens for flushing thos guys out. The joy was overwhelming as the Plaquerobot finally saw his long lost friends. After a crazy party weekend in Marbella, drinking IPA and hooking up with a lot of wonderful señoritas they began the golden age of Plaque – Creating Havoc around the world burning down dental clinics, breaking toothbrushes and dipping dental floss in rich sugar. 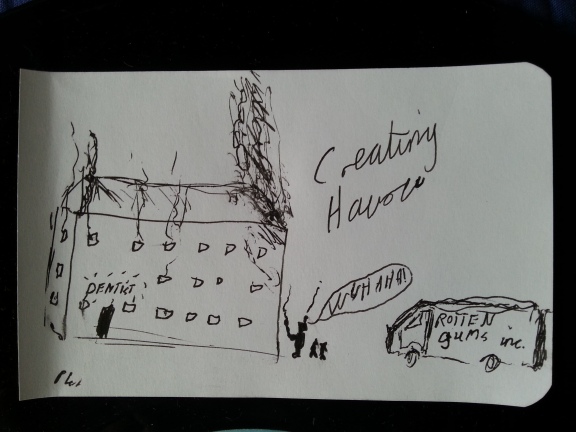 In ordrer to stop the terrific yet horrible Plaquistadores, now incorporated under the succesfull brand Rotten Gums Inc., the dentists and toothpaste companies became desperate. They gathered all they remaining toothpaste and added their remaining Fluor, into the allready deadly toothpaste. Thus were They able to reach a staggering 1757,37 ppm F – The strongest toothpaste known to man and robot: The Zendium Aksatone – Today considered illegal in 49 states! 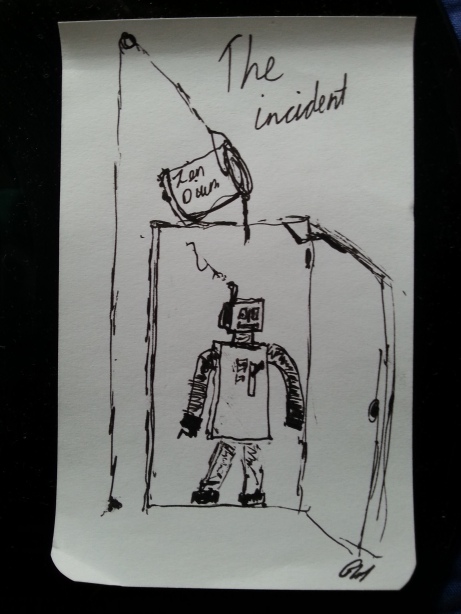 Filled with joy three dentists, today deleted from the files, quickly assaulted the P-1000. With an unpresidented amount of bad jokes such as: “Hey Plaquerobot! Do you know how to make a Swiss Roll? Throw him down the Alpes!” and “Why do call it 5 Dalmatians? you wrong counting IPA sipping son of a Bitch?” The life of the Plaquerobot model P-1000 slowly faded away, The only thing to sadistically comfort the robot in his last minutes before departuring to greener pastures, were the bad jokes. The Plaquerobot was left for dead just outside of Herning – The worlds belly button, where all the filth is gathering 🙂 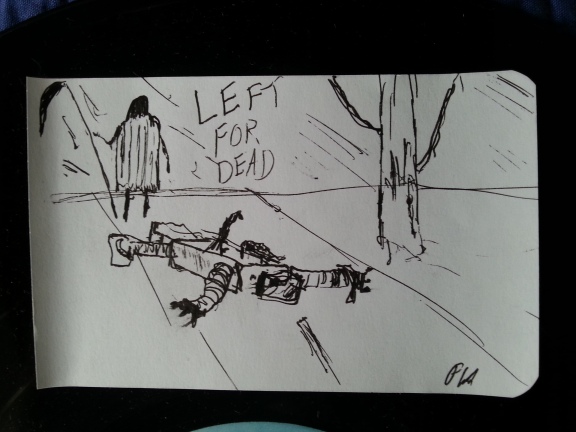 Karius and Baktus found the P-1000 four hours after the horrible and sneaky backstabbing move of the Dentist and toothpaste manufactures. In the autumn of 1999 the two Senior Plaquistadores burried the Plaquerobot near the magical tree of everoozing Plaque. They swore and oath never to stop before their natural leader was revenged! 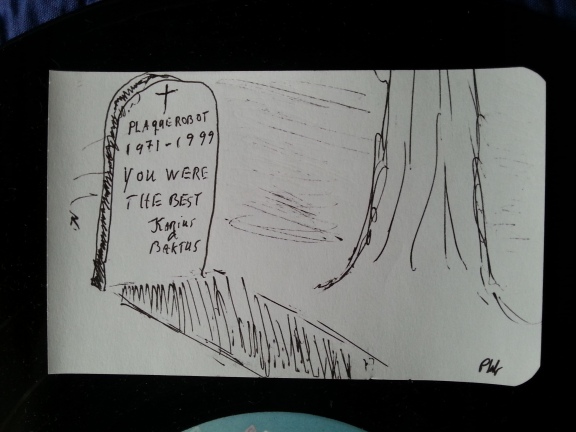 Time went by… Rotten Gums had to file for bankruptcy and i looked like the all Plaquistadores of the world had to surrender to the unholly gum association of No-Zen-dium and Col-ninth-gate. This view was however not shared by mother nature. She knows that the natural state of gums are to be plaquefilthy and aching, she unleashed an mighty lightning towards the holy tree of ever oozing Plaque 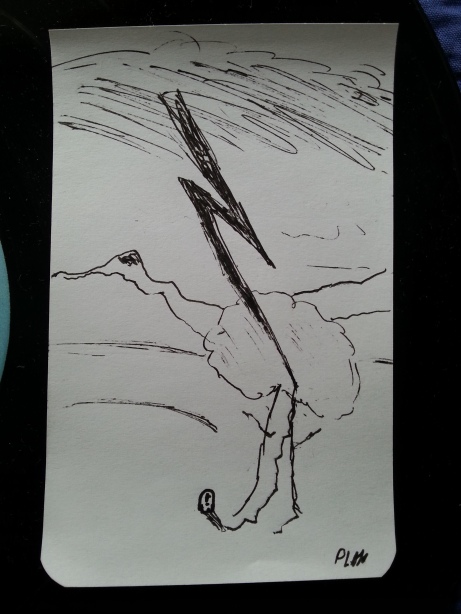 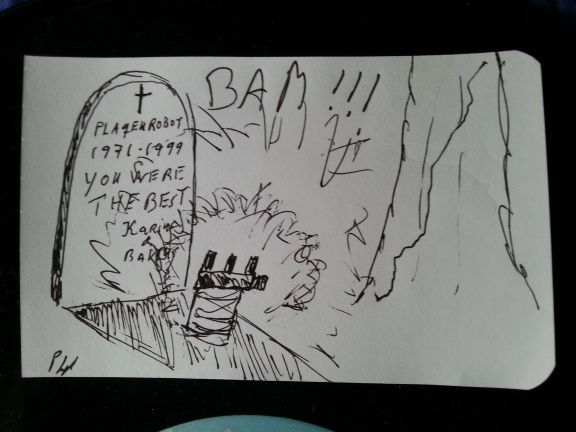 Life had reached the core of the now mutilated robot. However things were not the same anymore. The confused and not yet fully aware Plaquerobot could not fully remember what had happened ten years ago at the incident. Karius and Baktus was thrilled to met their former leader, the P-1000. They senior Plaquistadores got surprised and noticed a change in behaviour of the robot. The first command of the Plaqurobot, was to: “get down and boogie!” All of a sudden the P-1000 wouldn´t only care for spreading gum desease. It was also time jazz things up, find even hoppier IPA, dig records and Razz as many women and men as possible with bad jokes. To symbolize this knew interest, the Plaquerobot began wearing some good sounding headphones and replatted its original P-1000 sign with a P-1210 sign. A tribute to the worlds best record player of all time. (Upon investegating what happened to the Plaquerobot at the incident, studies has shown that a horrible short circuit occured which led to the passion for music, bad jokes and more hoppy beer) 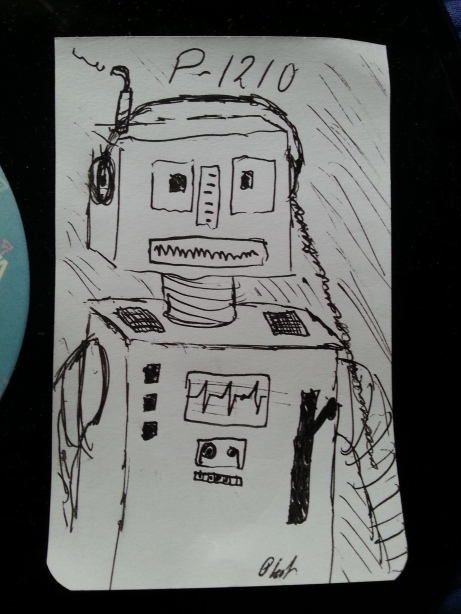 Soon the Plaquerobot began moving into the newly found world of records, parties and wonderful people. At the first gig the Plaquerobot ever played, at Morville, it had found a new purpose  – To make the world a more joyful place, filled with plaque, and records. All in a mixture of beerbars, grindershaking ladies, soccer playing lads and gum disease spreading followers known as the Plaquistadores! 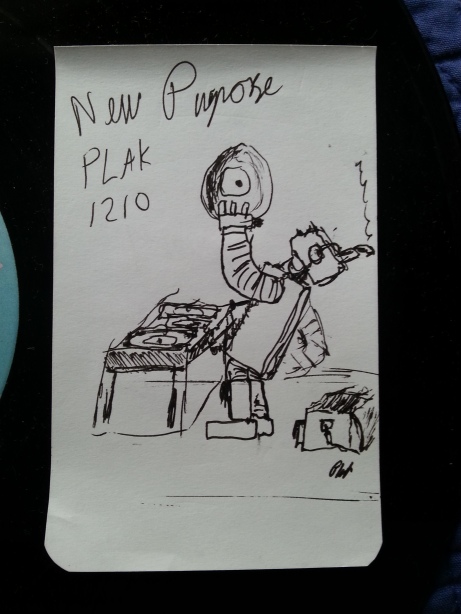 This is the origin of the Plaquerobot!

All illustrations were made by The Plaquerobot at a dental clinique in Brooklyn in the autumn of 2013, where the P-1210 studied the horrors of gum cleaning. A method to better know his true enemy. The dentists of Zendium!!!

5 thoughts on “Plakrobotten – The Beginning”